When we began contemplating this move, there were many concerns, not least of which was how we would get four dogs and a fish safely and happily across the ocean.  I explored every possible option on planes and ships, with every available itinerary.  And what I learned is that IT. IS. NEARLY. IMPOSSIBLE. to get four dogs and a fish across the ocean safely and happily. (Especially if one of your dogs is the infamously neurotic Natalia Kleber.)  So we reluctantly decided to bite the bullet and swallow the cost of a private charter. I think Craig broke out in hives as we confirmed this choice.
Once that decision was made and after much calling around I found a company called Air Charter Advisors, based in Florida.  They found us a plane that needed to get to Geneva to bring passengers home on the 6th of March.  So we could use the plane to get to Italy, leaving on March 4 and arriving on March 5th. We would fly on a Gulfstream GIV to Rome via Reykjavik, Iceland.  And that was how we were going to get the kids to Italy.
As the time of the trip got close, we were informed that the plane would now be stopping in Keflavik (never heard of it), Iceland instead of Reykjavik.  I hoped that this was the only part of the journey that would not go as planned.... because despite the hundreds of thousands of miles I have logged as both a business and leisure traveler, this was a Herculean undertaking and I was a novice.
Up until the day before the trip, I was pretty confident that I had everything under control. I checked and double checked lists.  Made and kept appointments.  Organized my things and my files.  But when the morning of March 4 arrived, it felt like all hell was breaking loose. Hundreds of little details to take care of.  Last minute things to pack.  People travel papers.  Dog travel papers.  1-800-GOT JUNK coming to pick up the last of the “stuff” around the house that would not be sold or donated. I could not shake those thoughts of “I’m sure I’m forgetting something” (which, of course I did, but c’est la vie). It was exhausting. And then, to add insult to injury, at around 11AM we had a little plumbing emergency (is there such a thing as a “little” plumbing emergency??).  If it weren’t for the best plumber in all of LA, Glenn Krinsky, who dropped another big job and rushed to come help us, I am not sure if I would be here in Italy writing today.  But he did.  And I will be forever grateful.
When the clock struck 2PM, as promised, the Mercedes Sprinter Van that was sent compliments of the jet company, arrived outside the house.  Our driver could not have been nicer as he saw us scrambling to bring 8 suitcases, bags, boxes, dog crates and the travel fish tank out to be loaded.  Like a jigsaw puzzle he made everything fit in the van. Then it was one final look around and goodbye Brentwood.
First lesson learned?  Don’t overfill a travel fish tank before you get into a moving vehicle or you will end up with a lap full of fish tank water!
After stopping to empty a bit out of Fred’s tank, we continued on to Van Nuys Airport, north of Los Angeles, which is a small facility catering primary to private planes. They buzzed us through the gates and our van drove us right up to the plane. Within a matter of seconds our crew came out to greet us and within minutes the van was unloaded, the plane loaded, and Craig, Natalia, Lizzie, Mario, Luigi, Fred and I were on board and ready to go. 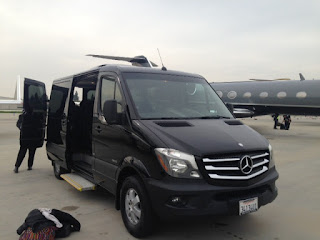 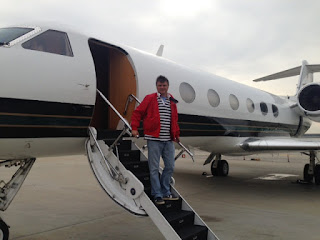 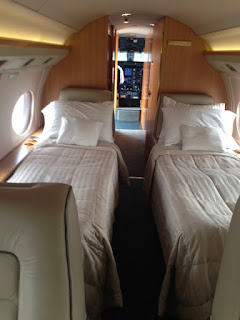 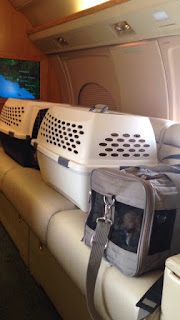 Second lesson learned?  Even with maximum tranquilizer dose recommended by the vet, Natalia is not a happy traveler in her crate.
Almost half an hour earlier than our scheduled 4PM departure time, we took off for Italy.  Ciao Los Angeles!


THE FLIGHT
The take off was smooth and soon after we were in the air our kind flight attendant offered that we could take the dogs out of their crates and they could feel free to move about the cabin. HAPPY DOGS!  It took only a few minutes for them to decide that they liked flying.  As long as they could have laps.
The vegetarian catering was delicious. The Veuve Clicquot perfect.  We ate and drank and then climbed, along with the dogs (3 with me, 1 with Craig), into the beds that had been made up for us pre-flight.  (Fish was content to stay back in the galley.) 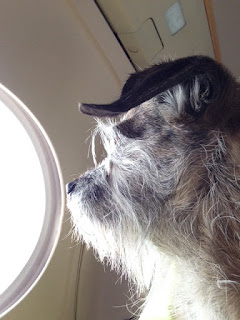 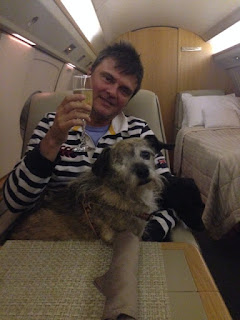 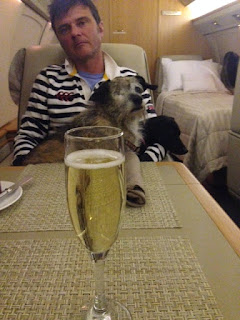 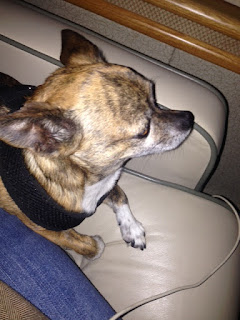 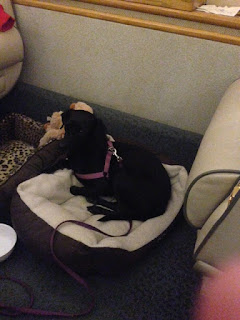 STOPPING IN ICELAND
A little more than 8 hours later we were awakened to buckle up as we arrived in Keflavik. I was originally told that we would deplane while the refueling took place and the change of pilots occurred.  We thought the dogs would get a bathroom break. But apparently that is not the procedure and we were told to sit tight. (Quite frankly it looked really cold and nasty outside, so I was happy to stay onboard.)  The dogs would have to hold on until Italy.
The stop was short and before we knew it we were back in the air for the 4.5-hour flight to Rome Ciampino Airport.


Third lesson learned? Iceland customs will not let you off the plane with dogs during a layover in Keflavik.


ARRIVING IN ITALY
In all of my prior arrivals to Rome I had flown into Rome’s larger airport, Fiumicino.  So I was not sure what to expect when we got to Ciampino.  We chose this airport because it had a small private terminal where we would not need to deal with the dogs in any long immigration and customs lines.  I was very surprised when we landed, got off the plane, and walked right out.  No one checked our papers.  No one checked the dogs’ papers.  No one looked at our bags.  No one asked about the fish.  Just a friendly “benvenuti” and we were out the other side where the dogs did their business in the grass and we were off.  (NB:  This would later on prove to be an issue, but that’s another story.)


Much like the ordeal when we left Brentwood, we had to load all of our bags and pets and ourselves into a van and prepare for the 5-hour journey to Fasano.  All of the vans they had available were manual transmission, so I got out of driving.  But I had fish duty.


Fourth lesson learned? It is very nerve wracking traveling with a fish…. especially one who has lived almost 10 years and you would feel horribly guilty losing during the move.


This is the second time I had made the trip from Rome to Puglia by car and, as I remembered, once you make a left a Naples, the drive across Southern Italy is quite pretty. But it was LONG.  And we were exhausted.  At one point we made a roadside restaurant stop and ate panini sitting in the parking lot.  Not so glamourous after the jet.  But delicious nonetheless. (NB:  It is not uncommon to get really decent food in Italy at the most unexpected places.) The dogs were happy to share. 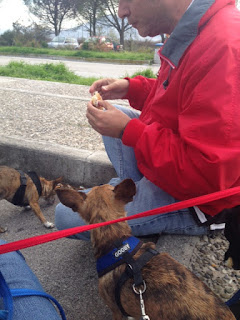 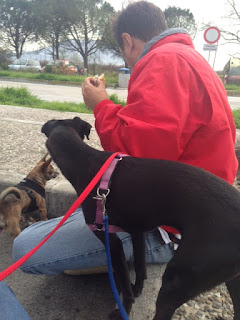 
By the time we arrived to Fasano it was dark and we were all spent.  It was about 21 hours since we had left the house in Brentwood.  After a quick stop at the food store so we would have provisions for the next morning we headed up the hill to the new property. (We have since been to that CONAD store about 5 times. They probably already know us as the crazy Americans.)


When we pulled up to the house, Franco, Franco’s daughter Francesca, Francesco, Francesco’s wife and Francesco’s sister were waiting for us with the keys, 6 two-litre bottles of water, cups, napkins and a huge ceramic bowl of typical Pugliese treats. Seriously the nicest people. 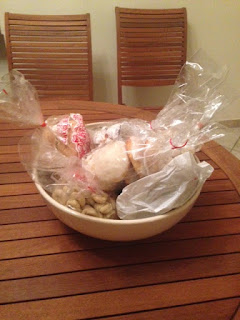 The dogs hopped out and happily explored their new home, very quickly deciding that the garden gnomes left behind by the previous owner are great things on which to do a wee.  And we proceeded to unload the van into Craig’s almost empty house. 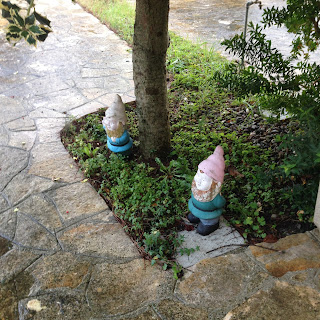 I popped downstairs to FINALLY see firsthand the renovation that I had been managing from thousands of miles away for 3+ months.  IT IS FANTASTIC! Much better than I imagined from the pictures.  I was, and am still, thrilled with the work they did.


We got a quick briefing on keys (of which there are about 50), lights, alarm systems, etc. And said our goodbyes.  It was now 22 hours since we had left the house in Brentwood and it was time for bed.  We changed into the warmest things we could find quickly in our suitcases and curled up with the fleece throws we had brought along for cover with the dogs on two of the sofas that remained, under a heater that promised to warm up an old stone house that had not been heated for a long time, and went to sleep.


Buonanotte!
Posted by Tracey Kleber at 05:53